I love doing handprint and footprint art.  Neither Lucky nor Ryder are drawing much more than scribbles yet, so this is a way to incorporate their young selves into art that I will keep forever.  When I was planning Rowdy's dinosaur birthday party, I came across some awesome Dinosaur handprint and footprint projects and knew that I had to give them a shot. 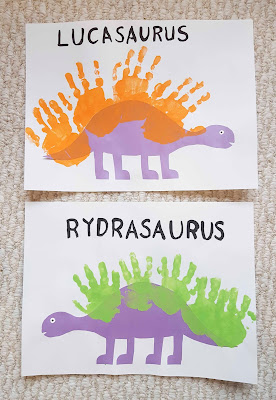 For the handprint stegosauruses, I needed to start with the base body of the dinosaur.  I thought that this was something I would need to paint on, but then I realized that it was actually cut out of construction paper. 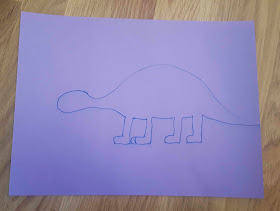 My freehand attempt wasn't so bad. 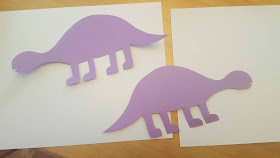 Normally I would have had Lucky help me glue the dinosaurs down, but I had a huge list of handprint and footprint crafts that I was hoping to do with the boys this weekend (sometimes it it easier to save them up and do a bunch at once) and I wanted  the base to be dry in time. 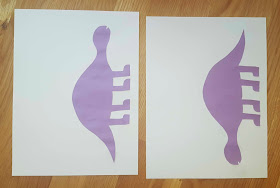 Now that Rowdy is 10 months old, making hand prints is MUCH easier than when he was only a few weeks old.  He isn't the biggest fan of the process, but having him sit in his high chair with another adult (Keith) to hold his arm kept us from getting painted ourselves.  (Lucky is a pro at this by now!) 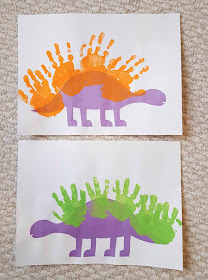 Finally, I just had to paint on some eyes.  I was painting a bunch of other projects so it was easier than finding googly eyes to glue on.


These are so fun!  I don't know what I'll do with them after Rowdy's birthday party, but I think they deserve a semi-permanent spot in our playroom.